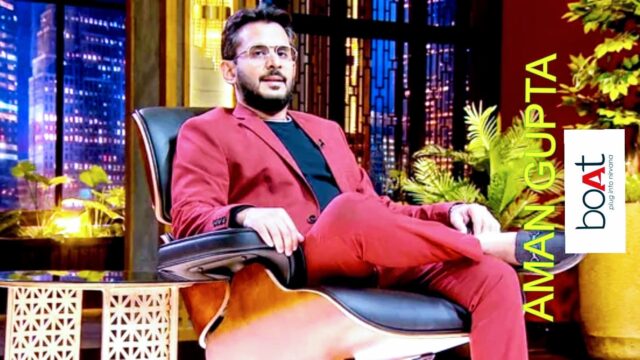 Read the below details to get to know more about Aman Gupta. After finishing his CA at an early age, he began working in his industry and experimented with a few firms. And it was not until he found his soul in anything that made him happy that he began his successful quest. #BoAt also contributed to the feeling of happiness.

Aman Gupta is born in 1982 in New Delhi, India.  His father’s name is Neeraj Gupta and his mother’s name is Jyoti Kochar Gupta. He has one brother, named Anmol Gupta. Aman Gupta has done his schooling at Delhi Public School R.K.Puram, New Delhi. He has done his graduation from Shaheed Bhagat Singh College with a Bachelor of Commerce degree. After that, he attended one of India’s most prestigious “The Institute of Chartered Accountants of India”, where he completed his CA.

Aman has done his MBA from Kellogg Graduate School of Management. He has also attended the Indian School of Business, where he did his MBA again in Finance and Strategy.

Aman Gupta worked at Citi as an Assistant Manager from 2003-2005. Before BoAt he has Co-Founded Advanced Telemedia Pvt Ltd and served as CEO from 2005-2010. He has also worked at KPMG as a Senior Management Consultant. He is also a Co-Founder of Imagine Marketing India and Chairman of the D2C Council at the Internet and Mobile Association of India.

Before Co-founding BoAt company, Aman Gupta also worked for Harman international as a sales director during 2012-13, where he was responsible for a wide range of consumer electronics brands supplied by Harman International in India, including JBL, Harman Kardon, and AKG.

Aman Gupta has a wife. Priya Dagar is his wife’s name. Mia and Adaa Gupta are the names of the lovely daughters.

Aman is a frequent user of social media. He has 39.8k Instagram followers. Aman Gupta’s Entrepreneurship Journey as a founder of BoAt Aman Gupta and Sameer Ashok Mehta founded Envision Marketing Services Pvt. Ltd. . The BoAt brand is owned by the firm. The BoAt is a millennial-focused firm that provides consumer audio gadgets and wearables such as headsets, headphones, smartwatches, and speakers, as well as another wearable. In a short period of time, it has risen to prominence. The company’s increasingly fashion-forward wearable brand targets young people. It is now the market leader and one of the top five wearable brands in India. Aman Gupta as a Founder of BoAt, boost the company’s profit by over Rs 1500 Cr.

Aman Gupta in the Indian version of Shark Tank

Aman Gupta, Who is the founder of BOAT, is currently an investor on Sonyliv’s commercial TV show Shark Tank India. He’ll be evaluating fresh company concepts and investing in the ones that pique his attention. Aman Gupta has recently begun his television career as a judge on the show Shark Tank India. The show is based on a corporate reality show from the United States. Which thoroughly assesses new company models and concept concepts. The Shark Tank India Show first aired on Sony Entertainment TV in India on December 20, 2021. This show Lens-kart.com has Aman Gupta as a judge. An investment made by Aman Gupta through Shark Tank India

Aman Gupta was an active investor before joining Shark Tank India, having invested in WickedGud, Ski-ppi Ice Pops, 10Club, Freecultr, Bummer, and other firms and start-ups. His own company is worth Rs. 704 corers on a net basis.

Working as a shark in the worldwide TV show Shark Tank India as a skilled businessman. Aman’s net worth is estimated to be in the region of 700 crore INR. After establishing his electronics company, BoAt, he has increased his earnings.

Despite repeated failed businesses, Aman Gupta persisted and eventually founded a company that is now the country’s favourite choice for young people. At addition, he was named Most Attractive Entrepreneur in the Lokmat Most Stylish Awards. 5 Reasons to buy gold from Dubai

The Many Benefits Of Sending Your Kids To Nursery School.

Is A Copper Range Hood Affordable?