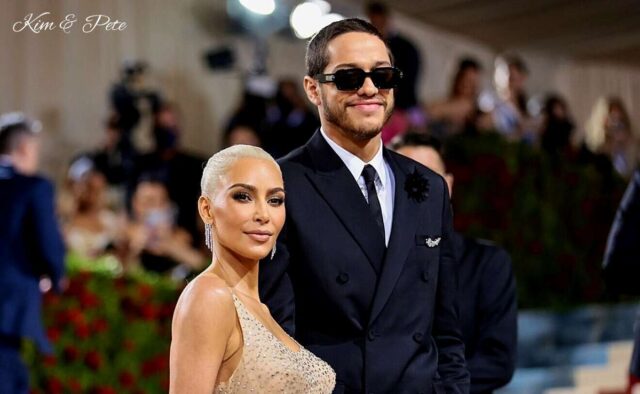 Some Sources confirmed that Kim Kardashian and Pete Davidson are no longer together.

A person with knowledge of the matter said that the couple, who had been dating for nine months, called it quits early this week.

Kim and Pete “have chosen to merely be friends,” according to a source close to Kardashian.

They learned that despite their intense love and respect for one another, maintaining a relationship was incredibly difficult because of their great distance and demanding schedules.

The two went on several dates in New York City shortly after being spotted holding hands on a roller coaster.

At the time, a source claimed that the reality star was “intrigued” by the comedian, but nothing official was said about their rumored fling.

The pair made their red carpet debut shortly after becoming Instagram officials in March of this year. The couple made a statement at this year’s Met Gala when they walked the red carpet together and appeared enamored. In a number of interviews, Kim continued to discuss her relationship with Davidson.

While Pete did not appear in the first season of Kim’s new reality show, The Kardashians, the second season trailer featured a glimpse of Pete as one scene featured Kim asking him to take a quick shower with her. Kim called the comedian the most “honest” person she has ever met. No official announcement has been made by Pete or Kim.

Why Did Pete Davidson And Kim Kardashian Split Up?

Other than that, why did Kim Kardashian and Pete Davidson split up? On August 6, 2022, a source also told Entertainment Tonight that Kim believed Pete was “very lovely,” but that ultimately their romance had reached its conclusion.

They still have great chemistry, but she kind of wants to date and be alone. Kim will always adore Pete and remain friends with him. There is no longer any drama or unusual behavior between them, and she still believes he is the nicest and sweetest man alive, according to the insider.

She believed that Pete was the polar opposite of Kanye, and it was advantageous for her at the time, the person stated. She thought it would be a pleasant fling at first, but when they started spending so much time together, it became more serious. Kim didn’t have the impression that she was ready to get married to him just yet.

Their relationship had ended due to distance, according to a second insider who also gave the website that confirmation. “Kim and Pete split up. The distance had been difficult, and things were beginning to lose steam. They struggled with Pete being gone for such a long time. Kim is doing well and is aware of how busy she is.

Pete has also been quite busy, the person claimed. The insider for Page Six also suggested that Kim wants to put her children first and stop her relationship with Pete. “Kanye might have issues with the kids if Kim is with someone else. He tries to divide and conquer.

He is made to perform it. Kim is a very devoted mother, and she will always put her family first. Peace in her life and at home is something she needs and wants.

Despite the fact that Kim was formally proclaimed single in March 2022, Kim and Kanye are still together. Kanye has a history of disparaging Pete. In February 2021, Kanye shared a screenshot of a conversation he had with Pete in which he said he would never allow Pete to meet his children.

The SNL actor commented, “I do hope [one day] I can meet them and [we can] all be friends.” Kanye’s now-deleted Instagram post with the phrase, “NO YOU WILL NEVER MEET MY CHILDREN.”

Will Kim and Pete ever reconcile?

According to sources close to the stars, a reconciliation between the couple is “not in the cards” and their breakup was a “shared decision.”

Kim and Pete dated for how long?

Kim Kardashian and Pete Davidson called it quits in 2021 after shocking their fans with their relationship. In August 2022, an insider told Us Weekly that “they peacefully split this week.” After dating for nine months, the two decided to call it quits.

How old are Kim and Pete in comparison?

They are 13 years apart in age; Davidson is 28 and Kardashian is 41. In an interview with E! News, Kardashian made light of their difference in ages. According to her, she bases relationships on vibes and advises people to pursue positive vibes whenever possible. “It doesn’t even matter if it’s older or younger.

What has been Pete Davidson’s longest marriage?

What is the Difference Between a Workstation and a Gaming PC?

The iGaming Industry in the Baltic – Most Popular Online Casinos

Why The Sound Is So Incredibly Important When Gaming